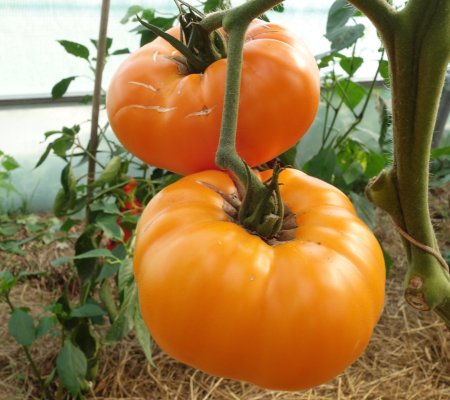 Strong yellow, voluminousand with the delicious succulence that highly resembles the taste ofBrandywine. There are several stems of yellow Brandywine and the one we offer, calledthe Platfoot strain, has received the highest score in a number of tests,delivering a bigger crop as well as a bigger amount of well-rounded fruits. Theplant grows high and needs steady support in order to bear the heavy fruitsthat can weigh up to one kilo, but normally around 300-500 gram. It is amongthe medium late varieties and enjoys hot weather, why Yellow Brandywine shouldbe cultivated in a greenhouse to ripen in time. A package contains about 20 seeds. Organic seeds.