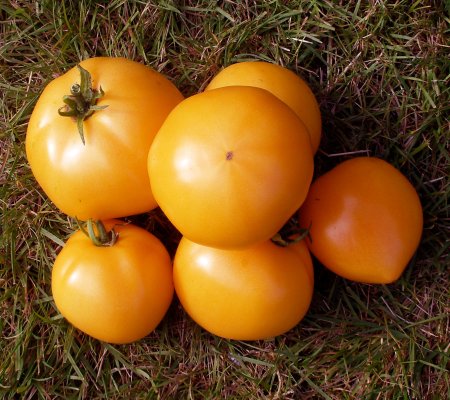 Big, orange and juicy beef tomato. On a good summer it yields well even in the open, but should preferably be grown in a greenhouse. The harvest is very large with heavy, 300-500 gram (1 lb) fruits. They have a smooth, firm flesh with few seeds and a flavour reminiscent of how tomatoes tasted in the olden days. But do not hurry the harvest. Preferebly wait until the fruit has a pink tinge at the blossom end, at which time the taste is fully developed. The plant is vigorous, tall and must be tied up and the side shoots pinched out. Goldie was introduced already in 1870 and has had its devotees ever since. A portion contains about 20 seeds.