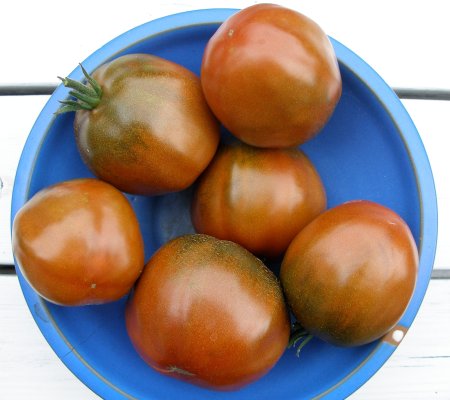 Is a popular `black` tomato from Russia which later has been improved upon in Japan. Actually, the fruits are not black, but a dark mahogany colour with a slight dark green tone on the neck.  They are medium sized, perfectly spherical with a thick and juicy flesh. They crack very rarely and are almost completely free of blemishes. The taste is aromatic with complex fruit acids and a distinct sweetness and sometimes a bit smoky aftertaste. A healthy plant, which bears fruits in clusters of 3-6 tomatoes, is 120-150 cm tall and needs support and pinching out of the side shoots. Nyagous will be a favourite of many growers. A portion contains about 20 seeds.