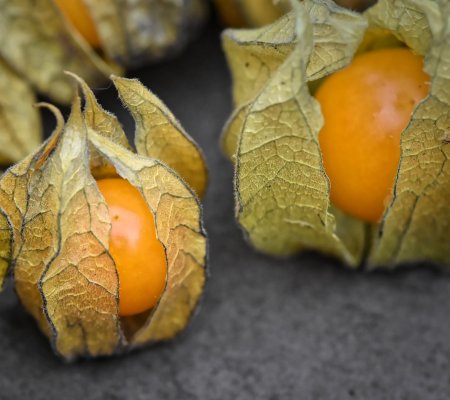 Is of choice, sound ancestry with smooth, sweet fruits and has been on sale since the 1930s. The berries are beautifully golden yellow with a truly delicious aroma when fully ripe. A portion contains about 50 seeds.

Sow indoors 7-8 weeks before setting out, in February-March for cool green houses and in March April for outdoors! These small seeds must be sown very shallowly and must not be allowed to dry out during germination which is ab. 2-3 weeks, preferably at a temperature of 27°C. A cool period during germination can often get sluggish seeds going.

Let the plants stand in a light airy place and after sprouting preferably at a temperature of 18°C. After getting a few real leaves the sprouts should be planted in pots. The temperature can now be lowered further. Temper the plants successively before setting out. Do not set the plants outdoors before the risk of nightly frost is over and the nightly temperature keeps above 7°C! Plant them a little deeper then they were in the pots and never allow them to dry out. Husk berry get roots on the stems if they are allowed to get under the soil so overgrown plants can be planted lying with just the top above the earth. However, tomatillos which have been sown and set out too early often get disturbed while growing and that causes lanky plants and a bad crop of tomatoes. Do not hurry too much with your sowing if you do not have a really good "nursery".

The fruits are almost ripe when the paper lantern has become straw-coloured and fallen to the ground. Put them in a cool place indoors to complete their ripening and the berry, which is the size of a White-heart cherry, gets its golden yellow colour. They can be eaten as they are, dried like raisins, frozen, preserved or in pies and desserts. The berry will keep fresh for several weeks in a cool place if the paper lantern is allowed to remain after the harvest.