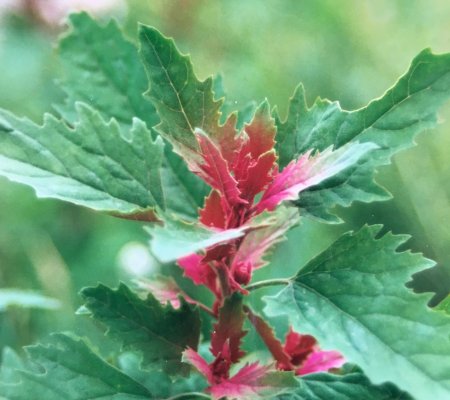 Chenopodium giganteum really suits its name. The contrast of colour between the light-green, prickly leaves and the light-red-violet shoots is splendidly decorative. It easily grows 2 m tall in well fertilized soil. Both leaves and flowers are used. This plant is both called "Tree Spinach" and "Magenta Spreen". A portion contains about 300 seeds.

Sow in spring when the soil has warmed up a bit and then gradually until July about 1 cm deep. Do not allow the sowing to dry out.

Clip or cut off the leaves continuously! If the top is cut off new branches grow which can be cut off in their turn. If it is not allowed to begin to bloom the orach can be harvested during the whole summer. After the blooming, if there is one, the seeds will be spread with the wind. They easily winter over and early self-sown seedlings are the first delicacies from the garden. These tasty, mild leaves are used raw in salads and sandwiches but also cooked in soups, stews, casseroles, stir-fries, pies and so on.