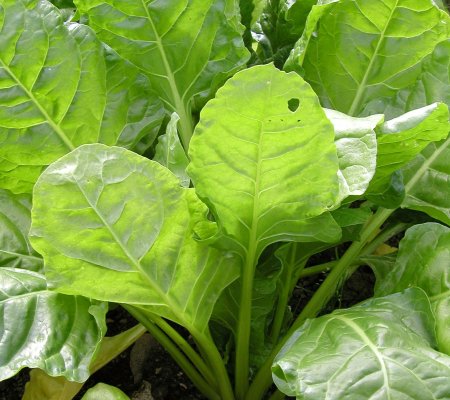 Is a completely green white beet with large, smooth leaves resembling spinach and thin stems. The tender structure and marvellous flavour make Erbette one of the tastiest white beets with more taste of spinach than other sorts. Erbette like its close relative, Perpetual Spinach can be harvested continuously during the whole of the long season far into late autumn and often winters over and yields an extra early crop in spring before beginning to bloom. A portion contains about 250 seeds.

Sow directly in open ground, 1-2 cm deep when the soil has become a bit warmer. If sown too early in cold soil, the amount of bolting increases.

Break off the outer leaves at the base, when needed. The leaves are generally used as spinach and the thick stalks can be cooked like asparagus. Chard can be harvested well into autumn and frozen after parboiling or dried in low heat. Covered with organic material, it can overwinter in a large part of the country and provide an early spring harvest before it begins to flower. Small fresh leaves are good raw.