The garden pea is a very old cultivated plant and its origins are uncertain. According to the latest analyses a pod plant from Asia Minor could be its ancestor. The oldest finds of peas, however, come from the borderlands between Burma and Thailand, dated to 9750 B.C. Lots of several thousands of years old finds, have been made in Europe, The Near East and China. Our Vikings considered the Norse god Thor as the pea"™s progenitor and since then our Thursday pea soup remains (Sweden).

These old peas were hard and had to be peeled like nuts, but had acquired the ability not to flick away their seeds as their wild relatives do. Through millennia of cultivation the species was improved and in the 1500s the first shelling pea with sweetness from a mutation in the French Pyrenees appears. Fresh green peas soon became a favourite food all over Europe. 200 years later the Englishman Thomas Knight brought out the even sweeter marrow pea. The mangetout with its membrane-free unripe pods is said to have been developed by the Dutch and are mentioned for the first time in 1536, but the Chinese have probably grown their famous sugar pea far earlier. Legends speak of 5000 years. Peas like other pod plants live in symbiosis with certain kinds of nitrogen collecting bacteria in the soil. They give the plant nitrogen in organic form in exchange for carbohydrates. Both the Greeks and the Romans utilized the fact that pod plants make the soil more fertile extensively.

The garden peas vary a lot in height, from the shortest 25 cm to the tallest 2 m or more. A sort normally grows taller the farther north it is grown because of more light. The peas are classified according to the looks and use of the pods and seeds and also according to the different heights and earliness of the sorts. Only the unripe green seeds are eaten of the shelling- and marrow peas while all of the crispy, sweet pods of the mangetout with undeveloped seeds is eaten. The snap peas have plump, sweet, fleshy pods which are harvested and enjoyed whole when the seeds are almostfully developed. Yellow and green boiling peas are harvested in late autumn and threshed when ripe and dry. Peas thrive in light well drained soil, with lots of humus and a good supply of water. It is a good idea to cover the ground around the peas with plant materials to keep the moisture. Water is very important to peas.ï»¿ï»¿

Apply a crop rotation of 4-5 years and spray the soil with extract of algae or horsetail water to prevent the spreading of fungal diseases. Fomented nettle water strengthens the plants and if they are attacked by plant lice, pea moth, pea weevil or trips, powder them with algomin, lime, ashes or rock flour. The insects also hate to be sprayed with teas of tansy or wormwood while pyrethrum and rotenone kill them directly. To further aid the peas and make them thrive it is a good idea to co-plant them with carrots, swedes, radishes, cucumbers, beans, corn and mint but far from the onion family and potatoes.

SOWING: Mangetout and shelling peas are sown as soon as the soil is ready, while the marrow- and snap peas want a soil temperature of at least 8-10oC to avoid rotting. All kinds can be sown gradually from spring to summer. Sow the peas ab. 3 cm deep, possibly a little deeper when sowing in summer because of the need for moisture.

HARVEST: The mangetout is harvested before the seeds have developed appreciably, while the marrow- and shelling peas are picked and shelled when the pods are fully ripe but not overgrown. The snap pea may well be allowed to grow thick and juicy with almost fully developed seeds. Peas tolerate 1 degree or 2 of frost in autumn but easily become spotted and loose their crispness after a few nights of frost. All kinds of peas are eaten fresh, boiled or fried etc. They can also be dried, frozen or preserved.

Pisum sativum
It's quite a new kind of pea, as the whole full and sweet pod with developed seeds, is eaten. The pods often only have two strings that are easily removed, before cooking or when eaten, by pulling the cooked bean between your teeth.
The Edible Podded Pea requires a somewhat warmer soil when sowing, otherwise they might rot. A minimum of 8C, but preferably 12-15C degrees. Read more about cultivating and history above. 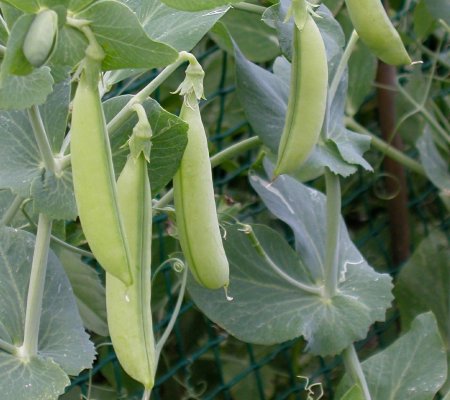 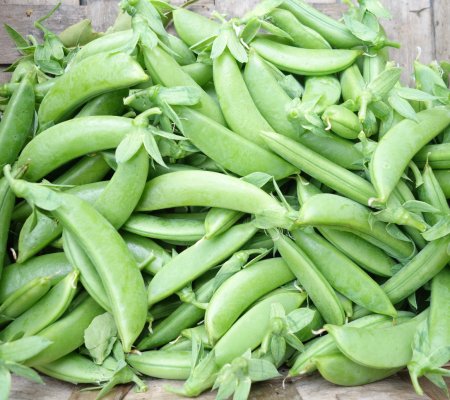 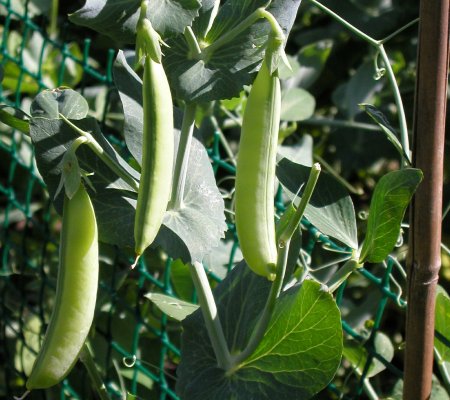 Was introduced in 1979 and immediately successful. It is a medium late tall snap pea (150...