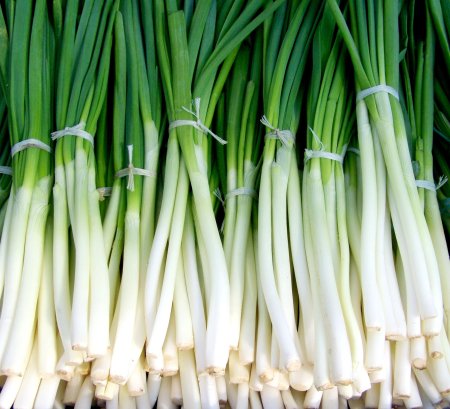 Has been one of the leading Welch onions on the market for a long time. It has vigorous, upright growing blue-green tops and a long, sturdy, white stem without an onion at the base. The neck can grow very tall (40-50 cm), especially if it is banked up. It resembles leek. Ishikura is a luxurious, Japanese Welch onion, which is quite unaffected by cold but not fully hardy all winters. A portion contains about 150 seeds.

Sow the seeds one inch deep, indoors or in a hotbed, singly or in groups, in March-April if you want large and early seedlings. Cut the leaves to about 6 cm during the early cultivation. The plants will be more stable then. Plant them out when all risk of frost is over.
For direct sowing in the open ground, which is predominant, sow the seeds in batches, once the frost has left the soil and it has dried up a bit, onwards until mid-July. It is also possible to sow in the autumn, in September, to allow the seedlings to overwinter for an early crop the following year. Moisture is the greatest threat.

Scallions, which are quite resistant to frost, can be harvested well into late autumn and are among the first to be harvested in spring. To harvest, the whole scallop is gently pulled up as soon as it reaches edible size.
The earliest sown and planted Spring Onions can almost get as thick as leeks and can be stored in the same way, but they actually keep best if they are allowed to remain in the soil and it is really only in the winter when they freeze to the ground, that you can not enjoy these delicacies.