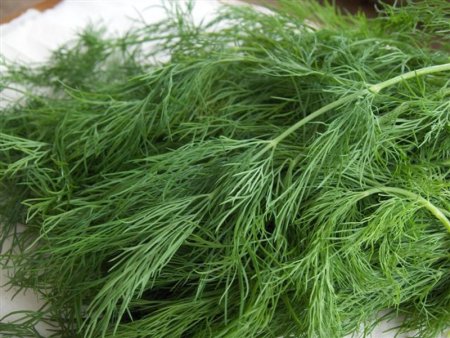 Is a vigorously dark green dill for summer- and autumn-harvests. Mammuth yields a great harvest and is not too affected by to drought. It flowers late with large heads. A portion contains about 500 seeds.

Sow thinly about 1cm deep directly in the plot as soon as it is ready, a little later for dill heads in southern Sweden. Dill can also be sown in the autumn (the seed must not sprout) for an extra early harvest the next year.

Keep 30- 40 cm for leaf dill and 40-50 cm for dill heads, which should also be a few cm away from its closest neighbours in the row. Leaf-dill can also be sown by scattering the seeds over a seed-bed.

Pick the leaves gradually during summer and autumn. If the whole plant is cut down, it grows back again. The leaves can be dried or frozen for winter really well, but should be harvested before the plant flowers. Dill heads for pickles and preserves should be cut off just before the flowering ends.