Petroselinum crispum var. tuberosum
The root parsley is a variation of flat leaved parsley, by selective breeding, and is of the same kind. It looks like a small parsnip but has a distinct taste of parsley. Root parsley should be grown in the same way and under the same conditions as parsnips.
The root parsley can be grown in most soils but prefers a well cultivated one, rich in humus and mixed with sand. It loves the company of asparagus, tomatoes, Jerusalem artichokes or potatoes, but not close to lavender. Do also avoid hard soils, where the root easily becomes ramified.
The root is used, chiefly, but also the leaves as ordinary flat leaved parsley. The root parsley is very rich in vitamins and minerals. It is also unaffected by cold and deserves more notice.

HARVEST: Harvest late, at the same time as parsnips, and store and use in the same way. If covered with plant refuse in well-drained soil it can winter well and yields a delicious root and lots of parsley-leaves in early spring. 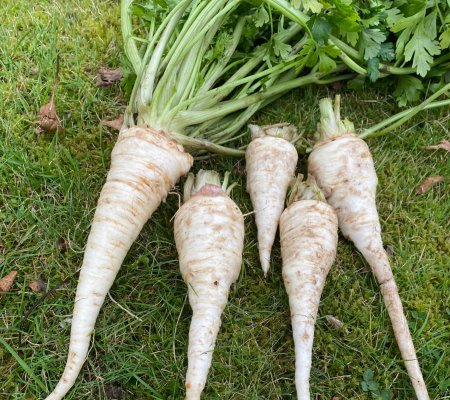 Is a reliable root parsley of the so called Berliner-type with its typical medium length...