Vicia faba
The broad bean is a member of the Pea family but not a close relative of the other beans. Instead it belongs to the Vetch species and is also called field bean, horse bean and dove"™s eye according to the size of the seeds.
It is probably originally from the Caspian Sea and the Middle East, where it was grown already in the younger Stone Age. Broad beans have been found in Egyptian graves and in the ruins of Troy. The Romans and the Greeks used them in many different ways. The broad bean arrived in China via the Silk Road in the 100s CE. There it is used the most today.
Today broad beans are mostly grown in the Iberian Peninsula, Holland and Britain. Broad beans grow upright with sturdy stalks of ab. 1m and fragrant white-black or red flowers. There are short sorts of ab. 30-40cm as well as tall ones of 150cm. It is different than other beans since the pods are rarely used only the large seeds, often unripe and tender but also dried for use in winter. They are rich in proteins and filling. The broad bean, which tolerates light frost, thrives in nutrient-rich, water-retaining, humus-rich soil as well as fertile clay-soil, even pure peat soil. It needs lots of nutrients especially in the beginning before the interplay with the nitrogen collecting organisms in the soil has started.
They are often attacked at the top of the plants by the black plant louse in summer. To prevent this it is a good idea to sow the beans with lots of air between them and in the company of potatoes, savory, buck wheat or by cutting off the tops when the blooming and fruiting is done. Cutting the tops speeds up the ripening too. Do not throw away the tops if there are no lice on them, they are good to eat slightly poached.
Pyrethrum or rotenone may be used against lice in the worst cases. Teas of tansy and wormwood help too.  The broad bean loves to grow in the company of carrots, cauliflower, herbs and peas, the latter being allowed to climb up the bean stalks. The onion family is not welcome.

SOWING: The big flat seeds can be sown in early spring as soon as the soil is ready ab. 5 cm deep. They are not, like other beans, as affected by cold soil. These beans germinate when the temperature is 4-5°C in the soil.

HARVEST: The pods are picked and shelled continually during all of the late summer and autumn. The grey-green seeds are used in soups, purée, casseroles or sautéed with herbs in oil. They can also be frozen after parboiling and ripe ones be dried for winter storage. Lots of people like to peel the beans after a quick boil like almonds to take away the bitter peel.  Quite young pods where the seeds have only just begun to develop are delicious, slightly poached or fried. 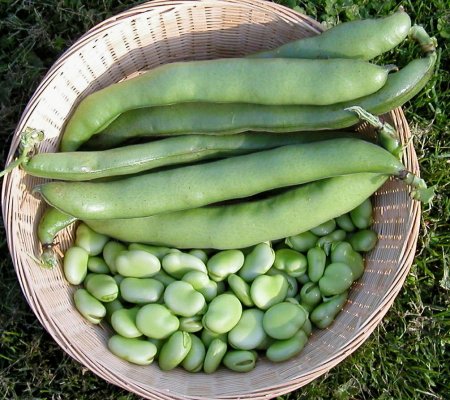 Is a very early rewarding bean of white seeds. The plants are sturdy and vigorous and... 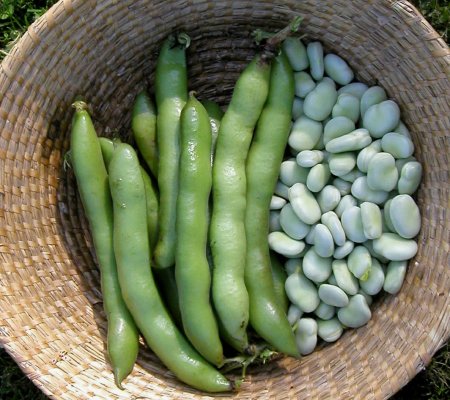 An old variety that originated in Spain. The pods are very long, up to 25 cm. and...

Is one of the earliest broad beans. This plant, which is barely 1 m tall, bears an... 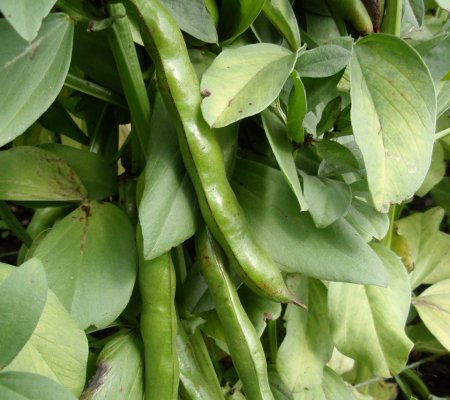 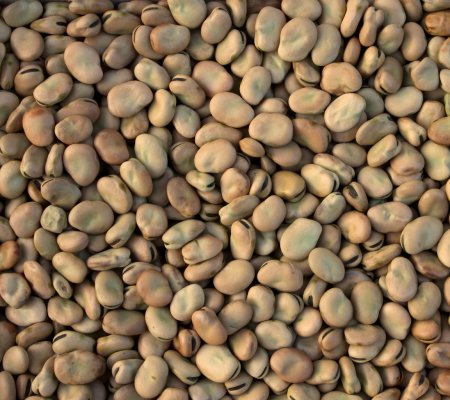