The onion plants are nowadays a family of their own, Alliaceae, and no longer belong to the Lily family, Liliaceae. The sorts we grow as food are of the species Allium (potently smelling). The onion was one of the first cultivated plants and it took the step from wild-growing to cultivated ab. 3000 before CE. It is thought to have had its original abode in central Asia and has been one of the most important crops in the world for a long time. The mild food onions we are used to were developed in ancient Egypt. In the North we didn"™t begin to grow onions until the Middle Ages but they soon gained great importance as food, herb and medicine.
Onions thrive in sunny, warm, airy plots in humus rich, sand-mixed soil. It tolerates drought well but yields a larger crop if it is watered during drawn out periods of drought. Fertilize with compost or natural manure, preferably the year before, but not too much. Onions need potassium above all to mature well. A surplus of nitrogen causes large foliage, later maturity and worse keeping qualities.

Onions should not be grown in the same plot more often than every 4-6 years to avoid contagious diseases in the soil and some insects. Spray the soil and seedlings with extract of algae or horse-tail water as a preventive measure. Normally, sown onions do better than onion sets and the risk of attacks by mildew during storage is less as well. Keep the onion plot free of weeds carefully! Onions do not develop well if the competition is too great, but do hoe shallowly because many roots lie shallow. When sown directly in a plot the onion seeds need 2-3 weeks to germinate and the weeds quickly become a problem because of this. The easiest way to get rid of the weeds is to burn the row with a gas flame before germination.
Co-planting makes it more difficult for the insects to find the onions. All kinds of onions thrive in the company of carrots, lettuce, the cabbage family, strawberries and many others but not beans and peas. Spreading Algomin, lime, wood-ash or rock flour in the rows repeatedly helps the onions against the onion fly, especially, showering with nettle water or teas of tansy and rhubarb tops help as well.

SOWING: Sow the black seeds ab. 1cm deep in March-April indoors or in hotbeds. Keep the sowing warm during germination, 20-25C, preferably. When the seedlings have sprouted put them in a light, airy, cool place. Especially during the last weeks before setting it is important that the temperature not be too high (max. 15C), because the onions may begin to swell to early believing it to be summer. The plants become sturdier if the foliage is cut now and then to a height of 6 cm. Eat the cut off tops in the same way as spring onion. Set out in a plot as soon as the soil has warmed up a bit and the risk of frost is over. Set the onions shallowly and firmly! Onions develop for a long time and can only be sown outdoors in the southern parts of the country. Sow 40-60 seeds/meter!  Sow 4-500 seeds in a 10 cm wide strip for sets!

SPACING: Keep a mutual distance of 2-5 cm during pre-cultivation! Keep 10 cm between the plants outdoors and 25-50 cm between the rows! 250-300 seedlings/m is just about right for growing onion sets.

HARVEST: Harvest the onions in dry weather! As soon as the tops of ¼ of the onions have begun to wither and fall, break down the tops of the rest of the onions. Pull them out in a few days and if the weather is dry and mild they can be allowed to remain on the ground for ab. 1 week to dry.  It is, however, safest to place them under a roof in an airy, dry place. You get the best keeping qualities if the onions are allowed to dry in warm air (30°C) for 1 week before trimming and placing them  in a dry, cool space, free of frost.
Onion sets should be harvested when they have grown to 1.5-2 cm in diameter, usually in August. Break down the tops and allow the onions to dry in the same way as the common onions. If the onion sets are kept in an airy and dry place at 30°C the whole winter the risk of bolts and attacks by mildew is small. If that is not possible a day at 40°C directly before setting helps some. Do not choose the big onion sets primarily! The larger onion sets the more bolts. 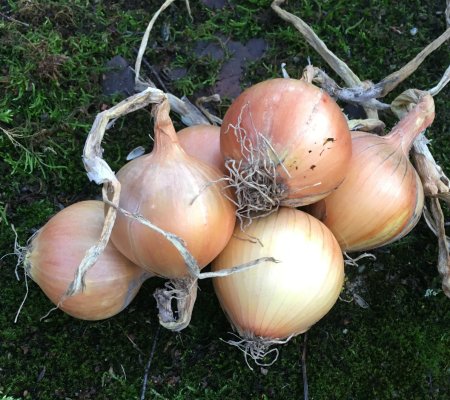 Is a medium early sort yielding large, round onions of yellow-brown skin and good keeping... 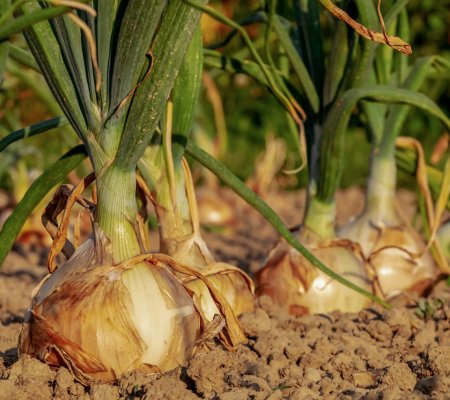 Is a reliable, medium early Rijnsburger onion with round thin-necked onions. The skin is... 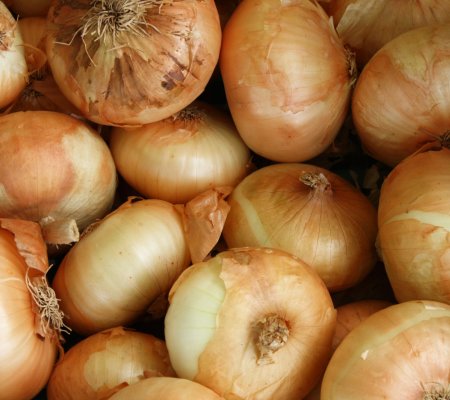 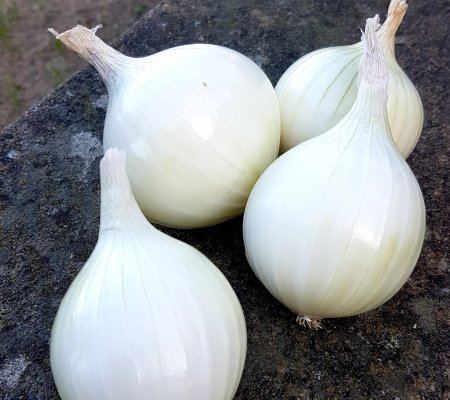 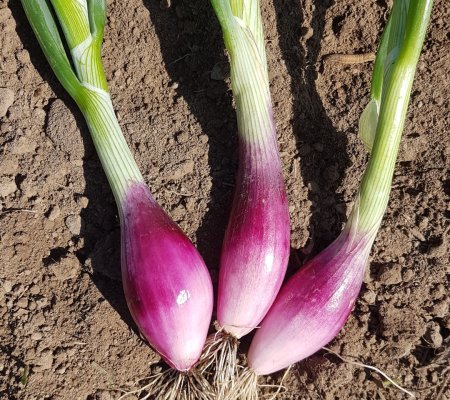 Is a traditional red onion from Florence, Italy, which has been around as name sort since... 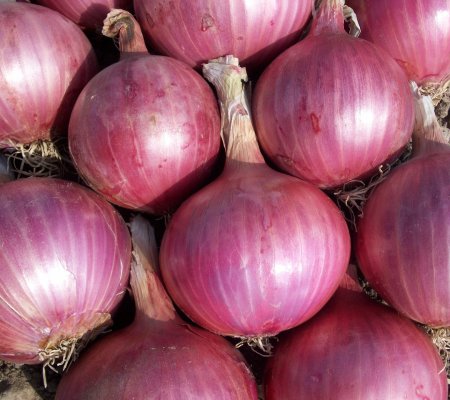 Is a beautiful, round to flatter round, shining, dark-blood-red, onion for fresh...