Brassica rapa var. pekinensis
This cabbage of Chinese origin is one of the most important vegetables from Asia and has been grown there for thousands of years. It came to the West late not until the mid 1800s. It is now commonly grown in Europe and America i.e. the new chiefly Japanese hybrids. Chinese cabbage makes no densely knit heads like white cabbage but a cylindrical tightly gathered rosette of leaves. The leaves, which are light-dark-green with a broad white nerve down the centre, are juicy and crispy and more or less rounded.
The soil should be rich in humus and nutrients and not too stiff. Chinese cabbage grows quickly and frequently begins to bloom if the seedlings get too long a day and too low and variable temperatures. It has sensitive roots as well, so, please, hoe shallowly and sow in separate pots at pre-cultivation. If the roots are damaged the plant easily begins to bloom.
Chinese cabbage wants to grow without interruption, needs a lot of water and must never dry out. It is also susceptible to clump-root disease so be very careful with your crop rotation. Many insects and other animals are so fond of it that it is frequently used as a capture crop. Read more in the chapter Growing cabbage plants for further advice on cultivation, co-cultivation and combating various pests.

SOWING: Chinese cabbage is traditionally sown 1 cm deep directly in the soil in mid July. Despite such a late sowing the early sorts do get ready for harvest even in northern Sweden. The new slow-to-bloom sorts make it possible to sow much earlier as long as the soil has warmed up a bit, but if early summer is unusually cold, the risk for blooming increases. At early pre-cultivation 22°C is the optimal temperature for sprouting and for about 3 weeks after the temperature must be around 20°C and then the temperature is gradually lowered before setting the sprouts outdoors, all of it to diminish the risk of blooming.

HARVEST: Chinese cabbage can remain in the soil far into autumn and can handle several nights of frost. It is harvested when the head has become slightly firm and is usually used raw. Cabbage which is to be stored for a longer time should not be exposed to hard frost. It can be stored for a couple of months if trimmed and rolled up in news papers or plastic at a temperature of 0-1°C with a relative humidity of 95%. 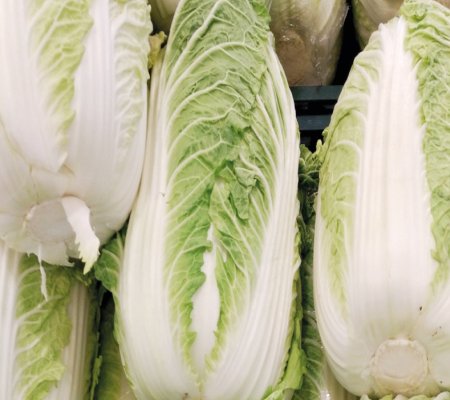 Is one of the few openly pollinated sorts remaining in trade. Its head is the classic,...